Congratulations to graduate Julia Ramos Critelle who recently relocated to Texas and has passed her Texas State Boards! Good luck with your career in the Lone Star State and let us know what you are doing next!

IAAS Graduate Julia Ramos Critelli has written to tell us she is now working at Renee Rouleau for Beautiful Skin in Plano, TX. In her note she tells us “We do strictly facial treatments and facial waxing and I’m building a clientele pretty quickly. People seem to really like what I do… Which is great because I love what I do!” No surprise to us that people like what you do for you were a great student here at IAAS. Congratulations Julia, we are excited for you!

New Milford, CT native Gina Daddona attended IAAS in 1993. After graduating from college with a degree in fashion, she began working in retail selling beauty products but wanted to somehow combine her interests of beauty and fashion. To do so successfully, she knew she needed in depth training in the beauty industry and that is what led her to the Institute of Aesthetic Arts & Sciences.

Upon completion of her studies at IAAS, Gina first took a job doing makeup and after that as an aesthetician in a salon. It wasn’t until she found a position in which she could combine both that she began to flourish. Living in New York and eventually getting more involved in fashion had always been her objective, so after a time she moved to New York and found work at a salon doing both skin care and makeup. Through networking and perseverance, she found a position at a top celebrity salon doing makeup with a focus on brow shaping. There she met Martha Stewart who hired her to do her makeup for tv appearances.

Gina continues to help celebrities such as Paris Hilton, Emmy Rossum, and Maria Shriver prep for tv, editorial and red carpet events along with many others. After several years of freelance and other salon work, she eventually ended up at the renowned Stephen Knoll Salon where she offers makeup applications and lessons, and of course brow shaping. 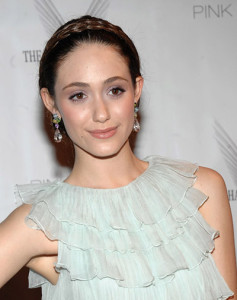 After many years she has really honed her eyebrow shaping skills – and in the past year was recognized by CBS and Allure Magazine as the go-to person for eyebrow shaping and makeup. Gina prefers tweezing and trimming (for the precision) and showing women how they can use makeup to really perfect their eyebrows as needed.

Gina likes the steady home base of a salon, a regular clientele (as well as celebrities) and the team dynamic. She is able to freelance on the side which includes being part of a team working backstage during fashion week twice a year (thrilling for a fashion major) (see fashion week blog posting) and doing some work with Dior cosmetics for VIP clients. She has also had the opportunity to travel with teams to Beijing, China and Cannes, France among other places for shows and events.

When asked if she has any advice for someone pursuing a career in makeup, Gina says, “I recommend lots of practice (on all skin tones, ages, and face shapes), knowing your industry and the people in it, finding established artists to assist, observing, listening, always learning, being professional, prepared, flexible, creative, business minded, and on time. Showcase your work, be proactive and go after the jobs you want.”

Gina credits the training she received at IAAS as being the starting point of this wonderful life journey she is on. “After working all these years,” she says, “I know I am very fortunate to have initially trained at such a top notch facility and I am very appreciative. I loved it there, have such fond memories, it was everything I thought it would be and more. IAAS certainly got me on my way to being able to work as a creative artist which is what I love most about my job.”

Every graduate who leaves IAAS comments on the in-depth training they receive while here. In case you want to know what the clients of these graduates think, check out the comment page of Allison Adamiak’s website. The clients benefit the most from what graduates learn here. Of course, Allison’s dedication to continually expanding her training and offerings and being the best aesthetician in her market, helps. Congratulations Allison!