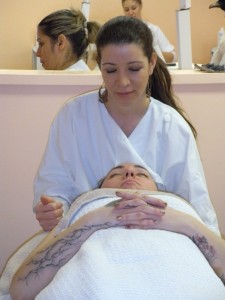 Thanks for all the work you guys do. This card is to ensure the importance of this “experience” in my life. It was a “life change” journey on my years and I thank you all for it.
Sincerely,
Dallila
Dallila was hired after graduation by Silvana’s Day Spa & Salon in Forestville, joining other graduates in the aesthetic dept. If you live in the Forestville area give Silvana’s a call and have Dallilagive you one of her great facials.

Aromatherapy, the use of “aromatic oils in a therapeutic manner,” can be traced back to first being used in Egypt in 3000 BC. Essential oils, if used correctly, can help both enhance and improve the overall well being of a person both physically and emotionally – helping to lift depression and soothe nerves.

Essential oils have numerous applications. They can be used in massage – one of the oldest and most beneficial uses of essential oils when blended correctly. In baths, compresses, or in a diffuser or vaporizer. To get the most benefit from using essential oils it is vital that the best quality oils are used.

IAAS has added Eve Taylor essential oils to its curriculum and now offers them for sale and as an enhancement to their menu of client services. Both clients and staff enjoy the benefits of these amazing oils.

“I absolutely love IAAS, and so does my skin. I have tons of allergies, and asthma, and my face is usually very red in my T zone. Doctors and so-called “beauty consultants” for years had told me it was rosacea. But under the direction of Lori and Julie at IAAS, I recently started using Eve Taylor Essential Oil #1 for redness due to allergies, along with my YonKa products. I just have one thing to say: ‘hallelujah!!’ The redness has faded significantly. Every morning I get up, look in the mirror, and literally gasp in surprise! I just can’t believe how “normal” and clear my skin looks. It’s not just the YonKa products (which are incredible) or the Eve Taylor Essential Oils (which are almost miraculous). I depend on the expertise and the compassionate care of the incredibly knowledgeable people at IAAS. I literally don’t know what I’d do without them.”

Congratulations to graduate Julia Ramos Critelle who recently relocated to Texas and has passed her Texas State Boards! Good luck with your career in the Lone Star State and let us know what you are doing next!

IAAS graduates trained in Brazilian Bikini Waxing report that this is the most in-demand service they offer and their clients and profits are exploding as a result. Don’t miss out on this trend, attend the May 7th training offered by IAAS graduate Alison Adamiak of Balance Day Spa of White Plains, NY. Class is for trained aestheticians ONLY and will be held here at IAAS from 9:00 am – 5:00 pm. Click here for full class details, payment info and enrollment form. Hurry, you need to confirm with payment by Saturday April 7 and class size is limited. If you have questions, call us Tuesday – Saturday at 203-262-6070.

2005 IAAS Graduate Laura Lewis Schreiner visited with us recently to attend classes on Lymphatic Drainage and Oriental Analysis as well as Brazilian Bikini Waxing. While here, she shared some wonderful photos of her family including her 6 month old son James. They are currently living in North Carolina but will be returning to Connecticut soon where she will be resuming her aesthetics career and putting her recent training to use!

New Milford, CT native Gina Daddona attended IAAS in 1993. After graduating from college with a degree in fashion, she began working in retail selling beauty products but wanted to somehow combine her interests of beauty and fashion. To do so successfully, she knew she needed in depth training in the beauty industry and that is what led her to the Institute of Aesthetic Arts & Sciences.

Upon completion of her studies at IAAS, Gina first took a job doing makeup and after that as an aesthetician in a salon. It wasn’t until she found a position in which she could combine both that she began to flourish. Living in New York and eventually getting more involved in fashion had always been her objective, so after a time she moved to New York and found work at a salon doing both skin care and makeup. Through networking and perseverance, she found a position at a top celebrity salon doing makeup with a focus on brow shaping. There she met Martha Stewart who hired her to do her makeup for tv appearances.

Gina continues to help celebrities such as Paris Hilton, Emmy Rossum, and Maria Shriver prep for tv, editorial and red carpet events along with many others. After several years of freelance and other salon work, she eventually ended up at the renowned Stephen Knoll Salon where she offers makeup applications and lessons, and of course brow shaping.

Actress Emmy Rossum had Gina apply her makeup for a red carpet event.

After many years she has really honed her eyebrow shaping skills – and in the past year was recognized by CBS and Allure Magazine as the go-to person for eyebrow shaping and makeup. Gina prefers tweezing and trimming (for the precision) and showing women how they can use makeup to really perfect their eyebrows as needed.

Gina likes the steady home base of a salon, a regular clientele (as well as celebrities) and the team dynamic. She is able to freelance on the side which includes being part of a team working backstage during fashion week twice a year (thrilling for a fashion major) (see fashion week blog posting) and doing some work with Dior cosmetics for VIP clients. She has also had the opportunity to travel with teams to Beijing, China and Cannes, France among other places for shows and events.

When asked if she has any advice for someone pursuing a career in makeup, Gina says, “I recommend lots of practice (on all skin tones, ages, and face shapes), knowing your industry and the people in it, finding established artists to assist, observing, listening, always learning, being professional, prepared, flexible, creative, business minded, and on time.  Showcase your work, be proactive and go after the jobs you want.”

Gina credits the training she received at IAAS as being the starting point of this wonderful life journey she is on. “After working all these years,” she says, “I know I am very fortunate to have initially trained at such a top notch facility and I am very appreciative. I loved it there, have such fond memories, it was everything I thought it would be and more. IAAS certainly got me on my way to being able to work as a creative artist which is what I love most about my job.”

Advanced study students learned a great deal from Trish Green during her classes here at IAAS March 11-13. Check out photos from Trish Green’s facebook page. We’ll be adding our own photos soon so be sure to check back. If you want to be notified of upcoming advanced training classes for practicing aestheticians at IAAS, sign up on our website

Look who stopped by at IAAS to say hello! Connie Devine is visiting from Wilmington, NC where she provides skin care and beauty services at the Copper Lily Salon & Day Retreat. She looks great and is doing well in her business. We were so glad to see her.